Building Stone, one steel beam and concrete pour at a time

Written by: The Hourigan Team

In October 2014, San Diego-based Stone Brewing Co. announced plans to build its East Coast production brewery and distribution facility in Richmond, Virginia. Hourigan was chosen as lead contractor for the development, which when complete will encompass 200,000 square feet on 14 acres of land in the Greater Fulton community, only a stone’s throw from the James River near downtown.

Construction at the Stone site began in early 2015, with the initial foundation laid in June. As construction progresses leading up to the facility’s January 2016 completion, we will bring you updates on our blog throughout the process and give you an inside look at the makings of a world-class craft brewery. 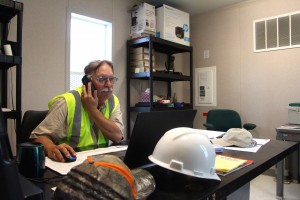 Keith Callis is the superintendent for Hourigan Construction at the Stone Brewing Co. site. 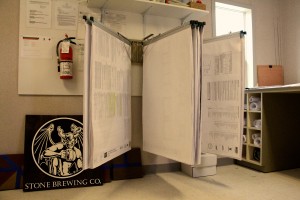 Site plans hang in the construction trailer at Stone. This is the Escondido-based company’s first production facility outside of California since opening in 1996. 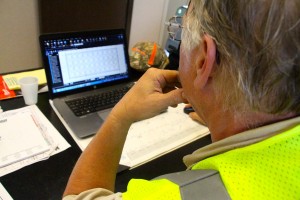 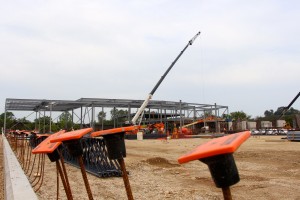 The Stone Brewing Co. site in Greater Fulton. To the left are bottling and packaging operations; to the right, the tank farm, which will hold Stone’s fermentation tanks. 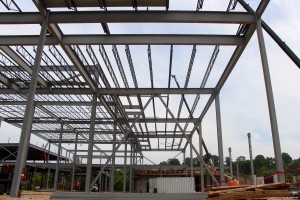 The future bottling and packaging area. 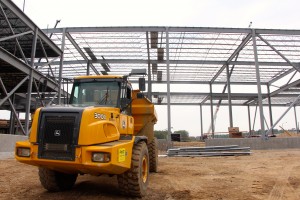 Site of the drop-off docks. This is where trucks will arrive containing all the resources required to brew beer. 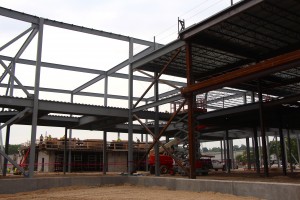 The future entrance to the Stone Brewing facility. Visitors will access the building via a pedestrian bridge and enter Stone’s two-story atrium. The facility will also include brewery tours, the path of which is currently under construction. 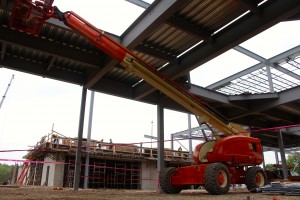 Tanks will rise through these holes in the ceiling, a feature that is part of the customer experience and 250-barrel brewhouse. Stone will produce year-round and special-release beers to be bottled, kegged and distributed, as well as enjoyed on-site. 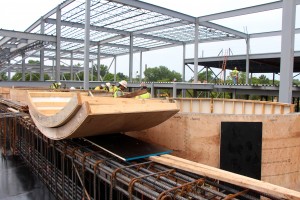 The Stone Brewing “Tank Farm” will eventually hold 40 fermentation tanks, the wooden molds of which are shown here from above. The foundational mat slab has been poured, which holds the concrete slab that will be poured in a few weeks. All told, the Tank Farm will be held together with approximately 4,000 yards of poured concrete. 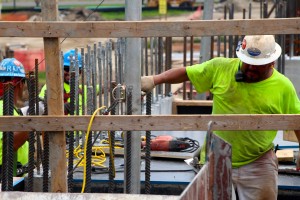 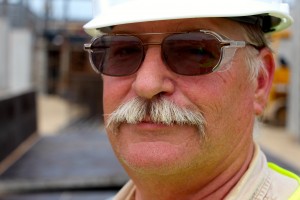 “I’m not a beer expert, but I’ve learned a lot about the beer manufacturing process through this and some past experience building a beer production facility years ago,” he says. “At the end of the day, this is all heavy construction like any other facility, it just so happens that they produce beer.”

“Heavy construction is one of the most labor intensive industries you will find. Over the years, computers have come in and taken care of a lot of our processes, but it’s still a lot of hard work. You will always have to have skilled workers running the machines and putting things in place.” 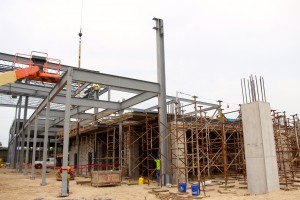 The steel beams at the left will hold a pathway that visitors will be able to walk on during tours and view the bottling operation and fermentation tanks, which will be held in the area at the right. 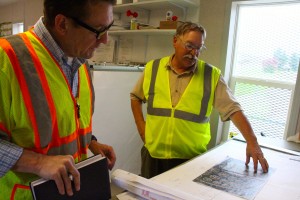 Reviewing plans for the Tank Farm.

5 Things to Consider When Building a Science Facility

The Sky’s the Limit: Vertical Expansion for Healthcare Facilities