The Financial Benefit of Using Technology for Clash Reduction

Based on industry data from the American Institute of Architects and Association of General Contractors, clashes (issues on a construction job) are estimated to have an average cost of $1,500 per instance. Since these issues can be an expensive drain of time and resources, clash detection is a critical part of the design and construction process. Utilizing technology like Building Information Modeling (BIM) to assist with clash detection can lead to savings in cost, time and resources.

By using this technology, project teams can highlight clashes that can significantly impact a project. Catching such issues early can reduce total project costs substantially.  For example, owner revisions or additions can easily be adjusted, without resulting in a high-dollar hit to the project plan.

Project sequencing also benefits from the use of BIM. By virtually roughing-in various systems before physically laying the materials, issues can be discovered and addressed before becoming costly and time-consuming. Project productivity is therefore improved by this process and ultimately results in higher quality.

There is also value in defining life-cycle needs for the building, preventing rework and making the facility inhabitable for years to come. A virtual model ensures an effective facility, promotes safety and reduces downtime due to standard maintenance needs.

By using BIM in the recent development of a confidential data center, Hourigan was able to identify more than 17,800 total clashes, primarily amongst HVAC, electrical, and plumbing systems. Of those clashes, 5-8% of the issues were considered large enough to have a costly impact on the project. All potential clashes – 100% of them – were detected prior to construction and resulted in savings on time, cost, and change orders.

The project team was able to identify and correct a wide range of issues on the data center. Ceilings were altered at window locations for a cleaner appearance. A laser scan found that the muffler on the building’s generator was slightly off from the planned installation placement. Chillers and boilers in the mechanical room were re-arranged to aid in future maintenance and cleaning needs, while a reroute of plumbing lines made both the chillers and the boilers more accessible for the facility manager. Valves, exhaust fans, and other pieces of overhead equipment were also lowered to ensure they were easily accessible for maintenance.

Using the $1,500 per clash estimate provided by the AIA/AGC, there was a project savings of between $1.35 million and $2.1 million on the data center job. There were 900-1,400 significant clashes that were resolved ahead of time, reducing schedule overruns and change order costs.

This cost was calculated based on the time commitments for the virtual construction coordinator to find the issue, for the assistant project manager to process it, and the design team to resolve the clash. Resolving the clash virtually was significantly less difficult than it would have been if discovered in the field. Two months after the clashes were discovered, an altered model was available for a computer-simulated test run to ensure all conflicts were resolved.

By the end of the project, there was an estimated 614-955% return, equivalent to $1.35 million to $2 million dollars, on the $220,000 investment in virtual construction efforts (time, labor, and technology). 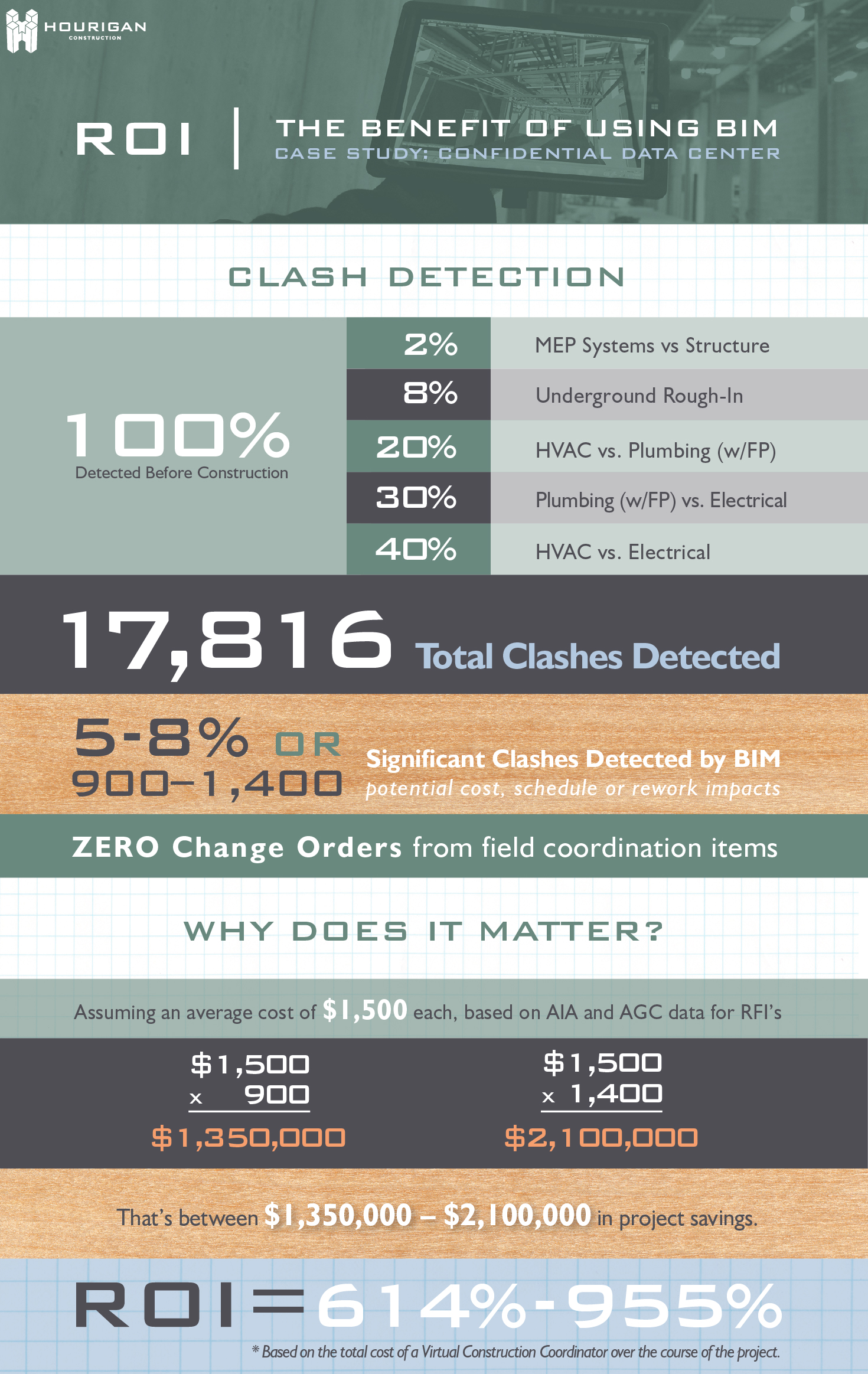 Execution: Getting Your Development Project Off the Ground (PART II)

Planning: Getting Your Development Project Off the Ground (PART I)

Public-Private Partnerships Q and A with Elliott Byers