Written by: The Hourigan Team

The Bon Secours Washington Redskins Training Center was a fast-track project that had to be completed in 25 short weeks.

The project was a challenge for all key players including the City of Richmond, Bon Secours, Washington Redskins, Timmons Group, 3North and Hourigan.  Once the final decision of the location of the facility was decided, planning began immediately so no time was wasted.

Construction Progress and Key Milestones
Since the beginning of the project, the project team was dedicated to working together to make sure the facility was completed on time. In the kickoff meeting, the team established schedules and key milestones that were critical to the project.

As design began, the team held frequent meetings and worked closely with Bon Secours to answer questions that arose in the process. This ensured that the facility’s goals were met while not losing crucial time. Due to this close communication between different teams, decisions were made quickly and efficiently to keep the project moving.

Some of the key milestones included:

Brian Brown, Senior Project Manager, and Mark Hourigan, President, were both confident that the facility would be completed on time. And they were right! Hourigan received the TCO on June 25th, which put the project ahead of schedule. To see construction photos over the course of the project, visit our gallery page.

First Floor: Bon Secours and access to practice fields
The first floor of the facility focuses on three main areas: medical, educational and physical fitness. Bon Secours Health Systems will operate year round and provide sports medicine rehabilitation and men’s health services. Bon Secours will also offer health and fitness educational programs for men and children. The first floor will also have a fitness workout room that will look out onto the practice fields and have direct access through hangar doors.

The locker rooms on the first floor are multifunctional and have a total of 92 lockers. Each locker will have a safe and electrical outlets for charging phones and other devices. When the Redskins are not at training camp, the locker room can be configured into 2 men’s rooms and 1 women’s room or 1 men’s and 1 women’s depending on the need for the space.

Second Floor: Leasing space
The facility’s second floor will be leased throughout the year for commercial use and provide a bird’s eye view of the practice fields. This space will be ideal for offices and restaurants. The Economic Development Authority and City of Richmond have not yet decided how the space will be leased.

July 8th Grand Opening
The grand opening celebration opened with the performance of the Richmond Public Schools All-City Marching Band and Elliott Yamin, Richmond’s American Idol hero, singing the national anthem. There were even skydivers to kickoff the event.

Joe Theismann exclaimed, “We all had a dream of what this facility would look like, and it’s been exceeded.” 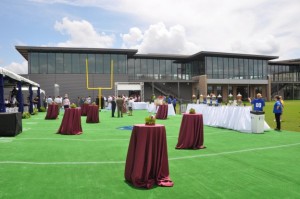 You can view the entire grand opening ceremony here and be sure check out photos from the event here.

Close spectator viewing area and important dates
The Redskins facility is unique to any other NFL training center due to the spectators’ close proximity to the practice fields. Most NFL training facilities have viewing areas that are far from the fields making it hard to see the players. Visitors of the Bon Secours Washington Redskins Training Center will be right at field level on a multi-tier outdoor amphitheater that will allow for a close up view of the players and practices.

Be sure to mark your calendars for these key dates:

There will be a total of 17 days of practice sessions that will be open to the public. Admission is free and fans are encouraged to bring lawn chairs and blankets for viewing in the spectator area. Parking will available for a fee at six different locations.

We are truly proud to have been a part of such a great project. Be sure to make a trip to the training center this summer to tour the facility, walk through the park trains and cheer on your Washington Redskins team!

A Day in the Life of a Project Engineer