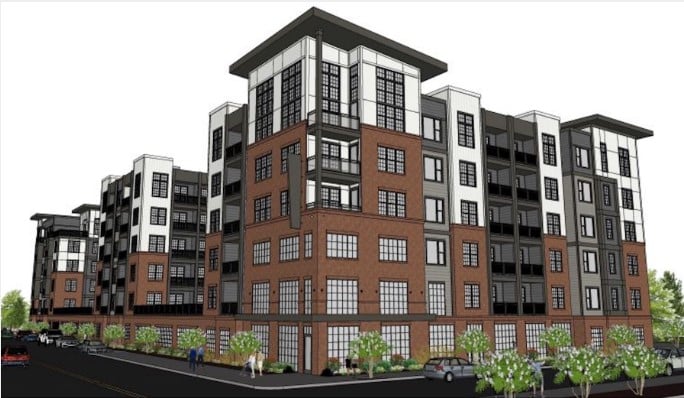 “A rendering of the planned five-story apartment building at 103 E. 2nd Street (City of Richmond document)”

“Another one of the many new apartment buildings coming to Manchester took a step forward last week.

The group behind the ongoing redevelopment of the former Caravati’s Architectural Salvage complex have completed their acquisition of the entire site with the purchase of the second of two parcels needed for the project.

The buyers were Catalyst Development Co., Blackwood Development and Hourigan Development, which have teamed up to build a five-story, 177-unit apartment building on the site.

It’s the second deal local developers have made with the owners of Caravati’s. Last year Catalyst and Blackwood, along with James River Housing Partners and Real Property Management, bought Caravati’s warehouse across the street for $2.1 million and are converting it into 42 apartments. Caravati’s, meanwhile, has relocated to downtown Ashland.”